Home Business What Do Planets Predict About Marriage? Find It Out Here!
Business

What Do Planets Predict About Marriage? Find It Out Here! 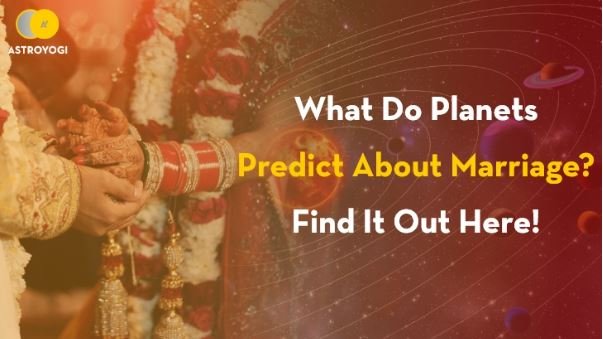 If you’re curious about how astrology influences marriage, keep reading to learn what each planet in a horoscope means for marriage.

In astrology, planets have the most significant impact on our lives. Like Jupiter is regarded as a planet of abundance and happiness, Mercury is considered for our intelligence and wit. Learn about the signs that the planets in one’s horoscope or birth chart predict for marriage and how astrological measures can help to strengthen this planet.

In Hindu tradition, no marriages (specially arranged ones) are fixed unless the Kundli or Natal Chart is studied by an astrologer well-versed in Vedic astrology. Vedic astrology, as we know, is the study of the planets and their positions in the various Houses of the Natal Chart or horoscope at the time of a person’s birth. A person of marriageable age is always interested in learning more about their marriage. So they consult a marriage astrologer to learn more about their relationship.

The following are some of the major planets that are checked in the marriage horoscope:

VENUS: This planet is associated with love, romance, and intimacy. Venus is the Karaka of the spouse for men. It signifies marriage, sensual pleasures, clothing, and luxuries. A strong and prominent Venus enhances the individual’s beauty and makes them romantic. It’s also crucial in determining romantic relationships. The afflicted Venus in the marriage horoscope causes difficulties in childbirth. If Venus is weak in an individual’s Natal Chart, they may lack physical attractiveness, exhibit unfriendly behavior, and experience failure in love or marriage.

MERCURY: If Mercury is present in the 7th House, a person would prefer a cheerful and talkative spouse. They might also marry in their early 20s. If an individual’s marriage horoscope contains a benefic Mercury, the individual’s life partner will be from another country and will settle in that country after marriage. It ensures a happy married life with a suitable partner. Your spouse would be intelligent, talkative, and cheerful. In general, the spouse would be of jovial nature.

Now let’s look at the planets that are considered to be troublemakers in marriage-related aspects. However, if these planets are well placed in a horoscope, they can be beneficial as well. You’ll need the assistance of a professional to figure it out.

Planets That Can Cause Problems In A Marriage:

SUN: According to Vedic Astrology, if the Sun is a prominent planet in the chart and has a connection to the 7th House or the 7th House lord, the individual will marry late. A malefic Sun is also one of the causes of extramarital affairs in which the husband and wife may lack mutual understanding.

MARS: Mars is said to be a malefic planet. If this planet is connected to marriage-related Houses, it may result in a late marriage. However, it does not indicate late marriage if Mars is the Lord of the 7th House or is in aspect with Jupiter. If Mars is positioned in the 1st, 4th, 7th, 8th, or 12th House in the Natal Chart of the Kundli reading, it causes Manglik Dosha. This Dosha has a negative impact on a couple’s marriage, such as causing financial losses. This Dosha can be avoided by consulting an expert astrologer for proper remedial solutions.

SATURN: It is the primary planet for marriage delays. Marriage may be delayed if the Lord of the 7th House is connected to Saturn in some way and the planet is in retrograde. The association with good planets prevents the situation from worsening.

RAHU and KETU: These two are naturally malefic planets in Vedic Astrology, which causes a delay in marriage. A late marriage will be indicated if these two planets connect to the 7th House or the Lord of the 7th House.
The above predictions are based on general astrology calculations, and these planets may have varying impacts based on your horoscope. Remember, every Natal Chart is unique; therefore, some people’s love and marriage lives will be extremely fulfilling, while others’ marriages will be volatile. One must have their horoscope examined to receive a personalized consultation from the experts. Consult an astrologer for Marriage prediction to learn more about the various planets influencing your marriage.

Genes: All you need to know

Entice your customers with the attractive packaging of vape boxes

5 Ways To Earn Money On The Internet

There Are Several Types Of Noodles That Can Be Made With A...

How To Get A FSSAI Licence In India: Know The Basics

Entice your customers with the attractive packaging of vape boxes
June 29, 2022
How To Check If Your Digital Marketing Course Fee is Legitimate
June 29, 2022
Hairstyles That’ll Definitely Turn Heads This Oktoberfest 
June 29, 2022